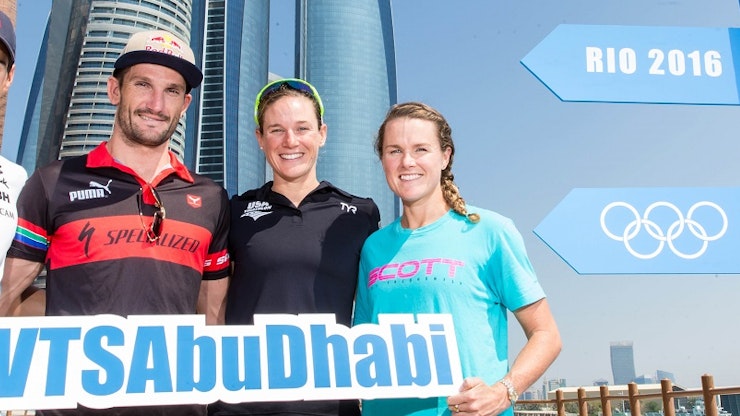 “I LIKE PEOPLE TO EXPECT GREAT THINGS FROM ME; IT MEANS i AM DOING WELL” SAYS DEFENDING CHAMPION MOLA

Abu Dhabi, UAE. Thursday, 3rd March 2016: One of the most anticipated triathlon seasons in memory will take off in the UAE capital this coming Saturday with the 2016 ITU World Triathlon Abu Dhabi. The world’s fastest triathletes will toe the UAE start line in a bid to earn the first World Rankings points of the year as they begin their final preparations for this summer’s Rio de Janeiro Olympic Games.

The elite men will compete first on Saturday with six of the world’s top 10 on the Abu Dhabi start list, delivering what is sure to be an action-packed start to the 2016 season. Topping the list is the Abu Dhabi reigning champion Mario Mola, who is expected to once again set a blistering pace.

While last year the course was positioned as a sprint distance, Mola charmed his way to a gold medal when he broke away from a small three-man pack in the final kilometres. In his final push, the Spaniard recorded the fastest 5km run split in WTS history, a record he maintained until he beat it himself later that year. Mola commented, “It all started here. Things are going well. You can train but then you want to see things happen, and so far I am very happy with where I am at and my performance. I like people to expect great things from me because it means I am doing well. We will see how things roll into the Olympics but I am looking forward to have a great day out there on Saturday.”

South Africa’s Richard Murray had a phenomenal 2015 season and will most definitely be looking to continue his streak as he looks ahead to Rio 2016. Ranked fourth in the world, he earned the bronze medal in Abu Dhabi last season and is enthusiastic about starting his final Olympic preparations in the UAE, “Last year was a great first adventure, this year it’s familiar and I am excited to come here and race again. It’s been a great lead up to the season so far and it’s great to see where the form is at and how it translates on the field.”

Ryan Bailie (AUS), Crisanto Grajales (MEX) and Joao Pereira (POR) are the remaining top 10 rankings to compete in the season opener. All three men carried out strong and consistent performances through last year, ending just around 200 points of one another in the final World Rankings.

The men will get the 2016 ITU World Triathlon Abu Dhabi underway at 1:06pm on Saturday, while the women will follow at 4:06pm local time with an equally jam-packed start list full of talent.

For the first time in over three years, the women's 2012 London Olympic podium will meet again in a race when they line up on the Abu Dhabi start line. Reigning Olympic gold medallist Nicola Spirig (SUI) is making her first season WTS appearance this weekend. The Baku European Games champion, she has already qualified for her fourth Olympic Games. However, her podium mates in London have yet to seal their fate. After two years of injury Olympic silver medallist Lisa Norden (SWE) lines up with Rio on her mind, as does Olympic bronze medallist Erin Densham.

American compatriots Sarah True and Katie Zaferes are all set to compete and top the ITU World Triathlon Abu Dhabi women’s start list. True was the second runner-up for the World Champion title last season, after finishing third in the world rankings, and will be one to watch as she arrives in the UAE capital with a brand new training approach for 2016. True graced three WTS podiums in 2015, including her victory in WTS Stockholm. She also secured her spot to represent the United States in Rio this summer after placing fourth at the 2015 Rio de Janeiro Olympic Qualification Event.

Zaferes missed her chance to complete the three-woman USA team heading to Rio last season, leaving everything to play for in Abu Dhabi. Zaferes will arrive on the start line intent on battling to claim what is hers to lose. She had a ground-breaking 2015 season, reaching the podium in six WTS events. While she has yet to win her own gold, she claimed five silver medals, the first of which was right here in Abu Dhabi, form she’ll be looking to continue on Saturday, “Training has been going really well and am excited because I have a team full of international athletes, like Richard and Mario. It’s been awesome to train with some of the best in the world and check out my competition. Here is where I get to see where all the hard effort over the season translates in a real scenario and no better place than Abu Dhabi.“

Rachel Klamer (NED) and Flora Duffy (BER) are the remaining top 10 ranked women to watch this weekend. Klamer was the silver medallist at the 2015 Baku European Games and ended her season with a very strong finish. Duffy will arguably once again be one of the fiercest competitions on the bike course this season, as she proved right here in Abu Dhabi last year when she stormed through the bike for her first WTS podium finish.

Duffy consistently takes a place in the front of the lead pack during the second leg and this year she is hoping to make some huge personal gains in her performances, especially as she gets ready to compete in her third Olympic Games, “The last few months I have spent  in Stellenbosch training, things have been going really well there; it’s such a beautiful place to train. Obviously because I raced very well last year my Olympic qualification is pretty secure that’s allowed me a slower build-up. I really am excited to race here on Saturday.”

Host partner Abu Dhabi Sports Council (ADSC) looks ahead to an exhilarating weekend with triathlon’s superstars: “The positive response we’ve received from the ITU, the elite athletes and the age group athletes following last year’s event has been fantastic; and this weekend will once again deliver a world class event that encourages elite athletes and age group participants from all over the world to take part year after year.” said His Excellency Aref Al Awani, General Secretary, ADSC.

The Race Village at the Abu Dhabi Sailing & Yacht Club on the Corniche Breakwater, is open on Friday and Saturday from 07:00 to 18:00. It is a spectator-friendly venue with i a 1,000-seater grandstand, a bike park, a ‘Friends and Family’ area, refreshment kiosks and a kids zone from where families and friend can cheer on friends competitors in a festival atmosphere. Over the weekend, there are junior triathlon, aquathlon, sprint, relay, standard and maxi distance events giving over 2,200 amateur age groupers the perfect challenge and thousands of spectators a packed weekend of entertainment.