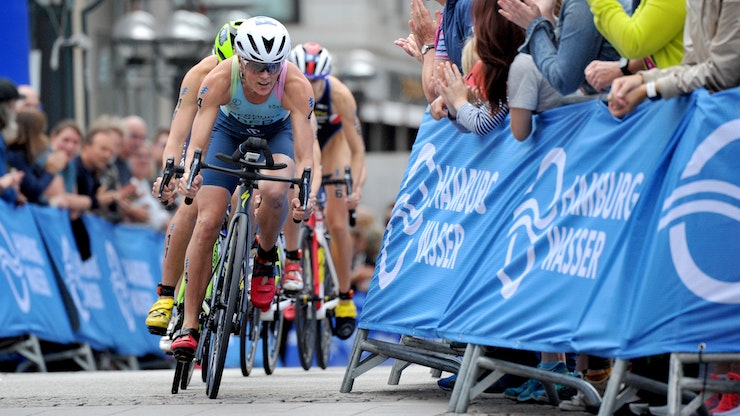 Abu Dhabi Sports Council, in cooperation with World Triathlon, revealed the full line-up of elite athletes participating in the World Triathlon Championship Finals 2022 Abu Dhabi, presented by Daman, which will be held from November 23 to 26, on Yas Island – the global hub for major sports tournaments.

The news was announced during a press conference held at ADSC headquarters, in the presence of H.E. Aref Hamad Al Awani, Secretary General of ADSC; Mohamed Al Zaabi, CEO of Miral Asset Management; Gary Marcia, Director of the World Triathlon Championships; Hayden Wilde, world number one and Olympic medalist, and a number of media representatives.

His Excellency welcomed all the athletes who will participate in the  World Triathlon Championship Finals 2022 Abu Dhabi, by Daman, which, for the first time, is being held in the Middle East and North Africa on Yas Island – the ideal sports venue for families and athletes, and a great world entertainment destination.

Al Awani said: “Since 2015, we have hosted a series of international triathlon championships, and have organised community races for all ages and abilities, which has led to a significant growth in interest in the sport of triathlon, while reflecting our quest to promote sports to improve the quality of life and wellbeing. We expect the community races in the upcoming championship to attract thousands of participants across the various distances.”

"Now in 2022, we are poised to host the World Triathlon Championship Finals, with the participation of 130 elite and world-class triathletes, such as Hayden Wilde from New Zealand, who is with us today; Georgia Taylor-Brown of Great Britain; Olympic medalists Flora Duffy and Kristian Blummenfelt; Ironman world champion Gustav Eden; women’s Ironman 70.3 Champion Taylor Knibb, as well as Commonwealth Champion Alex Yee. Many other paratriathlon champions will compete in the upcoming event in Abu Dhabi, with millions of fans watching all over the world. We are proud to host such a prestigious tournament, which reflects the confidence of the major global sports federations and authorities in Abu Dhabi’s ability to host major international sporting events.” H.E added.

Mohammed Abdalla Al Zaabi, Group CEO of Miral, added: “Our ongoing partnership with Abu Dhabi Sports Council allows us to play an important role in the evolution of the sporting events landscape in Abu Dhabi. We are excited to host the World Triathlon Championship Finals, reiterating our commitment to position Yas Island as a top global destination for leisure and entertainment. This year, in addition to the global experiences and attractions on the island, visitors, athletes and their families can also enjoy world-class shows taking place at the same time at Etihad Arena including Disney’s Lion King and Andrea Bocelli.”

Three current Tokyo Olympic medallists will be in action. Norway's Kristian Blummenfelt, who won gold in Tokyo, and pipped Britain’s Alex Lee for silver, and New Zealand’s Hayden Wilde who claimed bronze in the 2020 Summer Olympics. However, Wilde has now leapfrogged those two to find himself number one in the world rankings, with Yee not far behind in fourth.

Sandwiched between them are the second-ranked Frenchman Leo Bergere, this season’s European Champion, and third-ranked Jelle Geens – the man who took gold at the 2021 World Triathlon Abu Dhabi event.

In the women’s event, Flora Duffy took gold in Tokyo and will be hot on the heels of the current world number one Georgia Taylor-Brown of Great Britain – the woman she pushed into silver medal position in Japan. Bermuda’s Duffy also took gold in Abu Dhabi last year and will be looking to add to her long list of accomplishments that includes multiple world titles and Commonwealth gold.

Great Britain will bring a typically strong line-up to Abu Dhabi, headed by world number one Georgia Taylor-Brown, along with fourth-ranked Beth Potter, and seventh-ranked Sophie Coldwell. The United States will also have three of the world’s top 10 on display in the form of fifth-ranked Taylor Spivey, along with Taylor Knibb and Kirsten Kasper, who are ninth and tenth in the standings, respectively.

France’s Cassandre Beaugrand is currently third in the world female rankings and Tokyo bronze relay medallist, and another big threat in Abu Dhabi, while the remainder of the world’s top 10 females is filled by Germans Laura Lindemann (fifth), and Anabell Knoll (eighth).

Commenting on the event’s competition, New Zealand’s Hayden Wilde said: “It’s going to be a great competition between myself and Alex Yee. It’s like the Hamilton and Verstappen race and I’m really looking forward to it. Whoever crosses the line will take the championship world title. We’ve had a great rivalry, so to unite and finish in Abu Dhabi is awesome. Hopefully we can put on an exciting show.

Wilde continued: ‘‘Adding a world title to our achievements is a big thing to triathletes. Winning an Olympic medal is what we strive for, but a world title isn’t just one race, it’s consistency. To join the likes of Vincent Luis is a huge feat and doing it here would be amazing.’’

Jonathan Brownlee, the only athlete with three Olympic medals under his belt – bronze in London 2012, silver in Rio 2016 and gold in Tokyo 2020 Mixed Relay – will also line up in Abu Dhabi.

There will also be some strong MENA interest, when Jawad Abdelmoula takes to the start line. The Moroccan is the first athlete from the region to podium at a WTS event and is coming to Abu Dhabi in good form having won the 2022 Africa Triathlon Championships Agadir in September.

Additionally, there will be a raft of other competition winners in Abu Dhabi. Rachel Klamer from the Netherlands, who picked up her first ever WTS race win with gold in the UAE capital back in 2018, with the race contested over the sprint distance, will be in action, as will South Africa’s Henri Schoeman. The 31-year-old is a former Commonwealth Games gold medalist, and also made the podium at the Rio Olympics in 2016 – but local fans will also recognise him as the man who won in uncharacteristically rainy conditions at the World Triathlon Abu Dhabi in 2017. Spain’s Mario Mola, a three-time winner in Abu Dhabi as well as a former world champion, will also join the field.

The race routes start with a swim in the crystal blue waters of Yas Bay, the newest key waterfront destination in Abu Dhabi. On completion of the swim course, competitors will head out across Yas Island on their bikes, within the new cycling routes passing through key iconic landmarks including Yas Beach, Ferrari World Abu Dhabi, and Yas Plaza. The all-important run to the finish line then takes place along the waterfront, so that the audience can watch the run from the surrounding spectator grandstands. Each race follows multi-loop tracks, ensuring an enjoyable and enthusiastic view of the athletes participating in the competition.