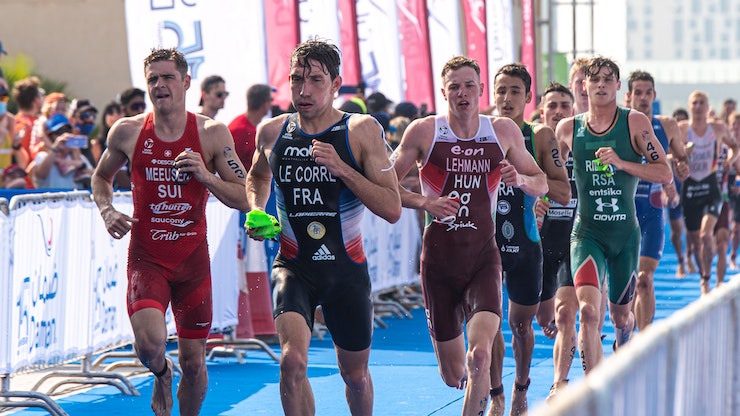 The World Triathlon Championship Series Abu Dhabi, presented by Daman, saw an action-filled first day as elite athletes raced on the tracks and waterways at the Yas Marina Circuit.

His Excellency Aref Al Awani, General Secretary of Abu Dhabi Sports Council said: ““We are pleased to have witnessed the world’s best triathletes return to compete again on Abu Dhabi soil. The full stands of Yas Marina Circuit, reflects the success achieved by the wise leadership in addressing the Covid-19 pandemic and providing a safe environment for international athletes to come to Abu Dhabi to participate in various sporting events, whilst also enabling the local community to attend various community and sports events within a safe and healthy environment.”

Al Awani added: "The large numbers received by Abu Dhabi reflect its full readiness to continue organising major international events that have a wide local and international presence. There is no doubt that this year's edition of the Abu Dhabi World Triathlon Championships, presented by Daman, succeeded in augmenting this accomplishment. Reflecting the tournament’s strategic position on the international events calendar, the event witnessed the participation of 56 elite male, 49 female athletes, and 91 para-athletes.”

Commenting on their role as strategic partner, CEO for The National Health Insurance Company – Daman, Hamad Al Mehyas, said: “It was incredibly inspiring to see so many of the world’s elite triathletes taking part in the World Championship Series Abu Dhabi presented by Daman. This year’s field was the strongest yet, with 196 elite athletes from all over the world taking part in the event.

To have had so many of the world’s best triathletes here in our nation’s capital was a really incredible experience. We hope that the hard work and dedication shown by these elite athletes will inspire people across the UAE to try the sport for themselves. As a trusted government partner, Daman is committed to its social responsibility by helping people across the country re-engage with their health and fitness goals and live healthier, more active lives.”

With a time of 00:52:21, Belgium’s Geens took the show by storm. After coming out of the water in 39th place, he worked hard on the bike to move into 6th position, before showing his impressive running skills to run through the pack to victory.

Commenting on his win, Greens said: “It feels amazing to have won, what is like the highest level racing in the Olympic distance triathlon. It’s always great to win and this is my second ever win. It is very unique for me still and I've had a very, very up and down season with lots of bad luck. So I am very happy to end this last World Championship Series Race with a win.”

Following her gold medal performance at the 2020 Tokyo Olympics, Flora Duffy, from Bermuda, was crowned winner for the Women’s Elites. Having crashed in 2018, she was delighted to claim victory on the fast and furious Yas Marina Circuit race track in a time of 00:55:42. Great Britain’s Georgia Taylor-Brown, who won silver at the Olympics, took second spot on the podium, with her British compatriot Sophie Coldwell completing the podium.

Commenting on her second win of the 2022 season, Duffy said: “It's always great to win the final race of the season and this has prepared me for next year so that's great. To be honest, the whole race was so hard. The waters really warm, so that was [difficult] as obviously we're swimming very hard and then [your face hits] the hard hot water. It's really technical but a lot of fun and girls were really pushing the pace today and I just tried to stay mentally strong and am very happy to win today.”

Paralympic gold medallist, Jetze Plat, from the Netherlands, was crowned World Champion in the PTWC Men’s sports class once more, finishing the race with an incredible time of 00:53:07.

Speaking on his win, Plat said: “It’s was a long and really special season. First with the Paralympics in Tokyo, then the Europeans, and then here in Abu Dhabi. I am so happy to have won all three races.”

“[With] Covid, it was difficult to say what races were going to happen, and 2021 was a full season. [Having] taken a triple in Tokyo and winning here, I am really proud of my performance this season and look forward to now having some rest,” he added.

Following his brief rest, Plat will be focusing on preparations for the Paralympics in Paris 2024.

Hailey Danz, from the US, took first place for the PTS2 Women’s category, finishing with a time of 01:17:21. Danz delivered a strong performance, proving her strength across the different sports.

On her accomplishment, Danz said: “It feels good. We have had so few opportunities to race in the last two years and not racing has made me realise how much I love it. It brings me so much joy to be back out there doing what we do.”

“I appreciate the races more after being gone for so long,” continued Danz, “I have my eyes on Paris in 2024 and in the short term, I will be doing my first Iron Man in a month, so I am excited to go home and get ready for that.”

Australian Lauren Packer, took home her second World Champion title in the PTWC sport class. Displaying her fitness prowess and experience, Packer crossed the finish line with a time of 01:05:24.

Commenting on her win, Packer said: “[It feels] so good to get another world title win today. I had won the world championships in 2019 so to be a two-time world champion feels really good. There is an amazing course here in Abu Dhabi and the swim course was brilliant. The bike course and the run course works to my strengths so I am really happy."

After rigorously training for the Paralympics and the World Championship Series, Packer plans to return to the circuit after taking a well-deserved break.

With a stellar performance time of 00:55:88, Dave Ellis, from Great Britain, won the PTVI Men’s Category, showcasing his incredible skills and talents.

Dave Ellis: “Obviously with Covid, it has been a long time for the Worlds to have been on schedule, and I am grateful to be back and it’s amazing to have won this race.”

Following his win, Ellis will be taking a well-earned rest before preparing for Paris 2024 as well.

The UAE’s own Abdullah Al Ghafri, from the Al Ain Club for People of Determination delivered and maintained his strong performance in the race, following his previous race in Portugal.

Commenting he said: “I am very grateful to the Zayed Higher Organization For People of Determination’s continued support which has strengthened my abilities both mentally and physically. Their support has enabled me to continue on a path of excellence and success and I encourage all of the UAE to practise triathlon for it is a tremendous opportunity to stay healthy and fit.”

Ismail Mohamed Al Maraziq, Director of Sports Clubs Department at the Zayed Higher Organization for People of Determination, said: "The Foundation is keen to provide the necessary infrastructure to support people of determination, empowering them to achieve their ambitions and realize their dreams. By providing them with all the necessary mental and physical training, we are committed to our work in helping our people qualify for these tournaments.”

He added: “Abdullah Al Ghafri is the youngest participating athlete and the only Emirati participating in the tournament, and the Foundation has provided him with access to leading coaches and tools in the world, helping him develop his abilities in the sport of triathlon, which contributed to the rise of his world ranking.”

The World Championship Series Abu Dhabi continues at Yas Island with amateurs taking the track and the waterway on Saturday, as well as other community-led activities.