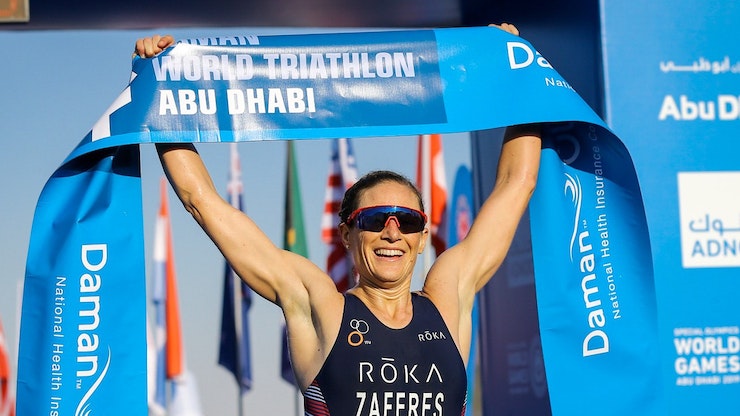 The Daman World Triathlon Abu Dhabi 2019 ignited the World Triathlon Series (WTS) today, as the strongest field of elite athletes to have ever graced the capital battled it out on the blue carpet at Yas Marina Circuit.

Under the warm Arabian sun, reigning World Champion and now a three-time winner in Abu Dhabi, Mario Mola showed his experience and finesse today, after a blistering run saw the Spaniard cross the finish line in 52 minutes. But Mola was given a run for his money, as WTS debutant and equally impressive runner Alex Yee kept Mola within distance, despite being almost ten years his junior; a hug at the end of the race showed a mutual respect of each other’s athletic abilities. Yee, an up-and-coming 21-year-old Briton, completed his first WTS race with a solid time of 52.03. The podium was complete by Mola’s fellow countryman Fernando Alarza, with a time of 52.12.

The race itself, however, wasn’t as clear cut as some may have expected, especially with Richard Varga, a powerhouse in the water, storming out of the first section as the leader. It didn’t take long for last year’s winner Henri Schoeman to emerge and display his prolific cycling ability, as he fought his way to lead the race in the second discipline. But it was the run where Mola and Yee came into their own. Despite Kiwi Hayden Wilde storming out the blocks and creating a healthy distance between him and the chasing pack, the New Zealander slowly succumbed to the pace and drive of Mola and Yee.

Despite resistance from Yee, it was arguably Mola’s experience that propelled the 29-year-old ahead, as he emerged as the winner of the Men’s Olympic category. Speaking about his win, Mola said: “I really had to dig deep in order to bridge the gap! I knew that if I could run consistently well then I knew it would be a good fight. But when you have guys like Alex and Fernando racing it’s going to be tough; well done to them.

“I had to work really hard,” continued Mola. “I’m very happy with this especially as it is the first race of the season, and it’s great having this new generation like Yee and Wilde to compete with.”

Commenting on his first WTS race, Yee said: “This has been above and beyond my expectations. It’s been incredible to compete with the likes of Mario, Henri, all of them – these guys have been my idols so to get out there with them has been amazing.” It was only a couple of years ago the Brit had an almost career-ending accident, but that clearly hasn’t put off the young athlete: “They were hard times and getting to this kind of level seemed very far away at certain points, so to be here in Abu Dhabi, after so much hard work, is credit to all the effort that myself and my team has put in.”

The elite ladies in the afternoon didn’t disappoint either, as World No.2 Katie Zaferes clinched first place and maximum points to kick off her season with a time of 55.31, followed by fellow American Taylor Spivey in second in 55.57, while Jessica Learmonth from the UK ensured it wasn’t a clean sweep by the USA with a respectable 56.06. Zaferes didn’t seem to slow down at any point, especially in her run where she created a 26-second gap between herself and compatriot Spivey as she crossed the finish line.

Zaferes delivered a strong and professional race today, proving she really is one of the contenders for the season with an impressive cycle and run. Speaking about her victory on the blue carpet, she said: “Even though my muscles felt a little tired before the race, it couldn’t have gone more perfectly for me. I managed to have a strong bike session which is always the plan. This is a great start to my season and I just want to keep getting better; last season really showed me what I need to do this year.”

After collecting her silver medal, Spivey commented on the leading pack and its strong American contingency, saying: “It was really hard to tell who was where in the first two laps of the bike, but we could see the gaps starting to appear before the run. Now with these points counting towards Tokyo (Olympic Games) it’s fantastic to see that we (Americans) are so strong. So it’s great to start the 2019 season with a second place finish!”

Delivering a gutsy performance was Learmonth, a lady determined to get on the podium. She jokingly said: “I’m sick of them getting clean sheets so had to shove one out!” teased Learmonth. “It’s a big year for me and the girls are so strong, so it was a goal for me to simply  just get round! It was a tough race but I’m happy with today and I’m going to just take each race for the rest of the season one at a time.”

Alongside the elites, over 600 junior triathletes took to the tracks and waterways of Yas Marina Circuit. Away from the race course action was plenty of entertainment in the Event Village. Bustling with friends and families, either supporting the athletes or simply enjoying the entertainment, there was plenty of delicious food trucks, shops, music and family fun.

Day two of the Daman World Triathlon Abu Dhabi 2019 continues tomorrow from 5am, with over 2,000 amateur triathletes set to race, as well as the brand new elite racing format – the Elite Mixed Relay.