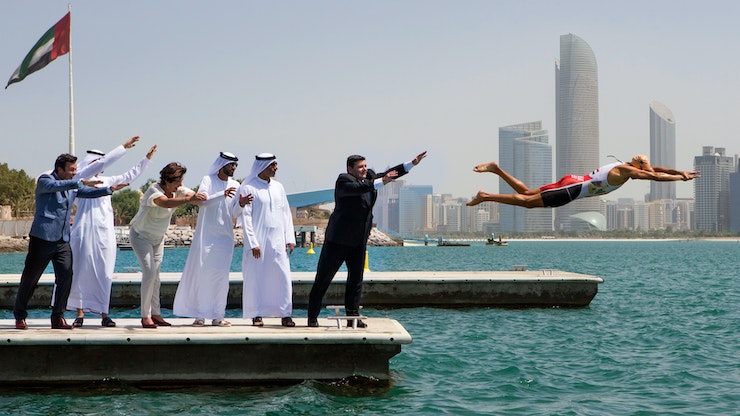 Following a five-year partnership between Abu Dhabi Sports Council (ADSC) and ITU - the international Federation for triathlon - the sport’s season opener will be held the UAE capital from 2015-2019 with next year’s event being centred in and around the city’s stunning Corniche from March 6-7.

“The World Triathlon Series represents the ‘best of the best’ - like Abu Dhabi - with the sports elite competing in a 10-city circuit, all striving to become World Champion and qualify for the Olympic Games,” said His Excellency Aref Al Awani, General Secretary, Abu Dhabi Sports Council. 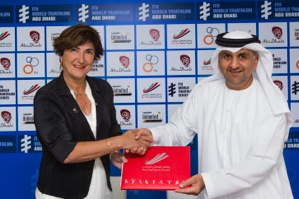 “We envisage a host of benefits emerging from this partnership. These include further positioning Abu Dhabi as a destination for world-class sporting events, additional destination exposure among an influential client base and encouragement of our own youth to join in one of the world’s fastest-growing Olympic sports. By implementing such objectives we are reflecting ADSC’s mission to work on the integration between sports and society in order to create a healthy and sportive environment for the community to achieve the plans, ambitions and expectations of the Abu Dhabi Government.

“This partnership is a natural progression of the success the UAE capital has achieved over the past five years with its own Abu Dhabi International Triathlon, which was organised by Abu Dhabi Tourism & Culture Authority and quickly attained the status of the world’s most glamorous triathlon attracting entries from Olympic and celebrity TV stars.”

This year, the Abu Dhabi International Triathlon, which was jointly won by the UK’s Brownlee brothers - reigning Olympic Champion Alistair and his brother Jonathan, 2012 World Champion - was contested by a field of 2,400, including Bold & The Beautiful leading lady Katherine Kelly Lang.

Around 2,400 age group athletes from 100 countries are expected to join the elite athletes in Abu Dhabi next March to compete over two courses; the ‘Olympic’ distance of a 1.5km swim, 40km bike and 10km run, or the ‘Sprint’ distance of a 0.5km swim, 20km bike and a 5km run.  The event will and be headquartered at the Abu Dhabi Sailing & Yacht Club where a spectator-friendly environment including a 2,000-seater grandstand, a bike park, a ‘Friends and Family’ area, refreshment kiosks and a kids zone will be built. The elite event will feature a ‘swim start’ off the Volvo Ocean Race yacht pontoons on Abu Dhabi Corniche with the top 65 men and top 65 women on the ITU World Series rankings competing for line honours in the opening event of the 2015 season.

“Abu Dhabi is a world class city and offers a fantastic combination of beautiful water and superb road infrastructure that is entirely suitable for a WTS event."

“This is a partnership which represents a meeting of like minds in terms of ambitions,” said Marisol Casado, ITU President. “Abu Dhabi is a world class city and offers a fantastic combination of beautiful water and superb road infrastructure that is entirely suitable for a WTS event.

“In our talks leading up to the partnership it became apparent that Abu Dhabi wants to take its triathlon to the next level and expand the sport’s reach in much the same way as ITU is determined to progress the sport internationally.”

The World Triathlon series has an impressive media footprint which includes a global television audience of over 200 million via 900 hours of broadcast time in 160 countries. In addition, the Series will boast 10 television magazine shows, post-race syndicated international broadcast news feeds and LIVE web streaming of all Elite races and magazine shows to triathlonlive.tv subscribers.

Iain Banner, Director of the event promoters Lagardere Unlimited Events SA, said: “It’s highly gratifying to have helped expand the ITU World Triathlon Series to include Abu Dhabi. We’re most grateful for the vision Abu Dhabi Sports Council has shown in wanting to bring a highly competitive world event to its home shores. The race venue is very special and will no doubt be a highlight for both the elite and age group athletes that participate. We look forward to a long and successful relationship with ADSC and commit to delivering a premium experience for participants and spectators alike.”

The triathletes are expected to arrive early to train for the season opener and, in all, ADSC estimates each event will deliver around 7,500 hotel room nights to the UAE capital.

For more information about the ITU World Triathlon Series, please go to: http://wts.triathlon.org/series

About the ITU World Triathlon Series

The ITU World Triathlon Series was introduced in 2009, creating a series of world championship races rather than a single-day world championship. From 2009 until 2011, it was called the Dextro Energy Triathlon ITU World Championship series, but was re-branded in 2012 as the ITU World Triathlon Series. There will be ten rounds in the 2015 season, culminating with the Grand Final in Chicago in September. The world’s top triathletes will compete head-to-head for rankings points that determine the overall ITU world champion, with media and fans able to watch from everywhere with a live international broadcast feed available from every event.

About the International Triathlon Union (ITU)

The International Triathlon Union is the world governing body for the Olympic sport of Triathlon and all related Multisport disciplines including Duathlon, Aquathlon, Cross Triathlon and Winter Triathlon.  ITU was founded in 1989 at the first ITU Congress in Avignon, France.  Headquartered in Lausanne, Switzerland, ITU also has offices in Vancouver, Canada and Madrid, Spain. It now has over 160 affiliated National Federations on five continents and is the youngest International Federation in the Olympic Games.  Triathlon was awarded Olympic Games status in 1994 and made its Olympic debut in Sydney 2000.  Triathlon is also featured in the Asian Games, Pan American Games and Commonwealth Games.  Paratriathlon was accepted into the Paralympic Games in 2010 and will make its Paralympic debut in Rio 2016.  ITU is proudly committed to supporting the development of the sport worldwide through strong relationships with continental and national federations, working with its partners to offer a balanced sport development programme from grassroots to a high-performance level.  For more information, visit: www.triathlon.org

The Abu Dhabi Sports Council "ADSC" has been established based on the Decision of H.H Sheikh Mohammad Bin Zayed Al Nahyan, Abu Dhabi Crown Prince and Deputy Supreme Commander of the UAE Armed Forces, No. 16 of 2006, The establishing of ADSC is a personification of the visions and ideas of our wise leadership to develop Sport and youth activities in the emirate of Abu Dhabi.

ADSC goal of regulating is to develop the sport sector in the emirate of Abu Dhabi through the development of sport clubs, sport institutions, and sport events by availing an integrated sportive environment in terms of legislative, organizational, technical, administrative, and infrastructural aspects in order to meet and to fulfil the needs and requirements of the community, and to avail the opportunity for the juveniles, youths, and various age categories and segments to have a professional sportive environment to enable them to practice and to enhance their sportive and educational skills, prepare them to compete strongly in championships and competitions at local, regional, continental & international levels. Also to promote sport investments and to spread and disseminate the culture of sport professionalism through the application and implementation of the latest and best international practices.

Lagardère Unlimited Events, the active division of the global sports agency, is one of the global leaders in organizing mass participation/endurance sport events with a clear mission to create and promote health and sport activity via their high quality events. The broad event portfolio ranges from leading cycling events like the Vattenfall Cyclassics in Hamburg, a UCI World Tour event with 24,000 amateurs participating , the newly launched Bordeaux Night Marathon to the exclusive partnership with ITU to deliver the majority of the World Triathlon Series events i.e. London, Hamburg, Cape Town and the 2015 Grand Final in Chicago.