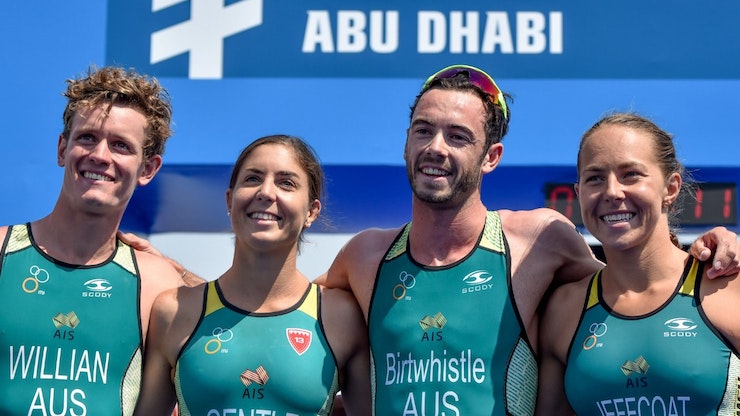 The season-opener of the World Triathlon Series (WTS) concluded today, as the Daman World Triathlon Abu Dhabi 2019 hosted its final races for athletes aged 11-70+ at the Yas Marina Circuit (YMC).

The much-anticipated Mixed Relay drew in strong crowds at YMC early this afternoon, as teams of four athletes representing 22 countries battled it out over a 300m swim, 6.6km cycle and 1km run – the super sprint format. Team USA started strongly thanks to Taylor Spivey, who had a solid cycle and run, to take her compatriots into the lead ahead of the first transition/relay ahead of Australia and Germany.

As the sun continued to heat up, so did the action on the track. Australia’s Emma Jeffcoat on the third leg managed to pull things back, before yesterday’s Elite women’s winner Katie Zaferes did what she does best, dominating the run, setting up Eli Hemming nicely to bring the gold home for the Americans. However, the Aussies managed to boomerang back into the lead thanks to Jacob Birtwhistle’s impressive cycle and run, seeing him win first place for his country in a time of 01:24:16. The US clinched second place a mere five seconds later, while France, who were third going into the final leg of the race, lost out to New Zealand as a final surge from Hayden Wilde saw the Kiwis cross the line in third place in 01:24:31.

Speaking about his team’s performance, Birtwhistle said: “We’ve got a lot of depth in our team, and there is a lot expected of us. We show that every time we come out on the relay and manage to put in a solid performance. It was a great race, from us and also Team USA, but obviously we’re delighted with the win here in Abu Dhabi.”

Although finishing in second place with Team USA, Kanute was proud of the team and their performances, saying: “Despite not winning I still think we had a really solid performance all around. And Jake (Birtwhistle) is one of the best super sprint guys in the world so I think our team held on really strongly and it’s still early in the season, so we shave a lot of room to grow. A podium is our goal every time – we nailed it today.”

The second day of the Daman World Triathlon Abu Dhabi 2019 actually kicked off with the Olympic Triathlon category athletes at 7am, who took to the water on a somewhat colder morning than yesterday. Facing distances of 1500m, 40km, 10km of swimming, cycling and running respectively, the cooler temperatures were surely welcomed. Winning first in the men’s 35-39 age group division was Oscar Balta with a time of 2:01:58, while Aday Diez de Ulzurrun took gold in the men’s 30-34 age group division in 2:02:05; he was closely followed by Ireland’s Jason Fahy just over one minute later. Speaking about taking the podium top-spot, Balta said: “The race was amazing – perfect temperature, perfect weather conditions. I was happy with my swim, the bike was a little bit tricky in the corners, and I ran a lot better than expected.

“I’ve been racing here since 2016 – it’s a race I always bring my family to,” added Balta. The organisation of this event has been perfect us. The kids have lots to do and it feels more like a family day out than a regular triathlon day.”

In the women’s division, Najla Al Jeraiwi from Kuwait took the gold putting in a time of 2:18:33 for the 30-34 age group division, while Brit Kayleigh Dawson – in her first ever triathlon – took gold in the 25-29 age group division in a time of 2:19:06. Commenting on securing first place, Al Jeraiwi said: “I just love racing, and WTS Abu Dhabi is one of my favourite events. The swim and bike went really well, despite being used to sprint distances; I’m really happy with the result today and can’t wait to come back”.

Dawson, still smiling from ear-to-ear after her first triathlon, said: “I feel there was a bit of luck for me today! I’ve been doing some training at Al Hudayriat Island and I am a strong open water swimmer; the cycling: there were so many tight turns and U-turns and even after a bad cycle accident six months ago, I thought ‘you know what, you’ve got four limbs, get out there and test yourself in a race.”

Supporting the XXX[JD2]  athletes at Yas Marina Circuit, were fans, friends and families who all took advantage of the bustling Event Village. Brimming with food trucks, shops, music and family fun, there was just as much fun had off the course as there was on.