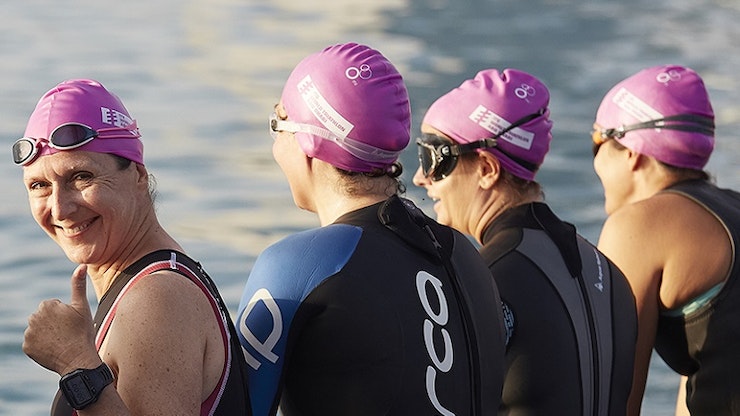 Over 2,000 age group participants from around the world descend upon Abu Dhabi Corniche as race day gets underway

The ITU World Triathlon Abu Dhabi debuted in 2015 with over 2,000 age group participants. This year the race, hosted by Abu Dhabi Sports Council, once again drew in over 2,000 competitors and once again enjoyed a distinctly international flavour with over 70 different nations represented on the start lists.

More than 550 participants flew in to the UAE’s Capital from more than 50 countries, specifically to compete in the International Triathlon Union sanctioned event. Leading the international competitors was esteemed guest, His Royal Highness Shaikh Nasser bin Hamad Al Khalifa of Bahrain. His Royal Highness participated in the maxi distance, entering the water at 6.30am for the very first wave of the day and finishing in an impressive 03:58:55.

Commenting at the finish line His Royal Highness Shaikh Nasser bin Hamad Al Khalifa commented: “I’m very happy with my result and to be participating in this event for the first time; I enjoy travelling to the UAE to participate in sporting events here. This race was very useful for me to gather more experience of triathlon and it was also a great way to continue my preparations for a full Ironman race in South Africa in April.”

Putting himself on the Olympic distance podium as second male finisher for the second year in a row was Spaniard Aday Alvarez, who flew over from his home in Qatar to compete in the race. The 28-year-old triathlon enthusiast finished second overall in last year’s ITU World Triathlon Abu Dhabi Olympic distance and was delighted to continue his form. Alvarez said: “The swimming course was amazing, I was first in my age group to come out of the water. The cycling went well although it was a little windy and the run course was hard. It was a tough one but I’m really happy!”

UAE National Obeid Al Jasmi, a 34-year-old Olympic swimmer, was delighted to have completed the Olympic distance race as part of the first ever UAE competitive triathlon relay team alongside his team-mates, 35-year-old cyclist Badr Ali Thani from Dubai and runner, 26-year-old Khalifa Al Nuaimi from Fujairah. Abu Dhabi resident Obeid was proud to race in his home city: “The weather conditions were perfect and the ambience was really thrilling. We feel very proud to compete in this race as part of an all-Emirati team in our home country!”

Giving Abu Dhabi a dose of triathlon girl-power was 20-year-old Egyptian Fatma Hagras, the first female of her age group to finish the Olympic distance race. Fatma, who took up triathlon just four years ago, travelled from Egypt to compete in the race: “It’s my first time in Abu Dhabi and it was super-exciting! The swim was quite crowded at first so I didn’t come out of the water amongst the leaders but cycling is my strong point in triathlon so I was able to catch up. The heat picked up on the run but overall it went really well and I’m very happy!”

Another inspirational Arab woman, 28-year-old triathlon enthusiast Noura Al Ameeri participated in the Sprint distance, having travelled to Abu Dhabi along with numerous members of the Kuwait Triathlon Team. Kuwaiti Noura was delighted with her experience: “As a team we’ve travelled to many triathlon events around the world and we had a great experience here in Abu Dhabi today. It’s also fantastic to see so many pro triathletes here and huge numbers of spectators!”