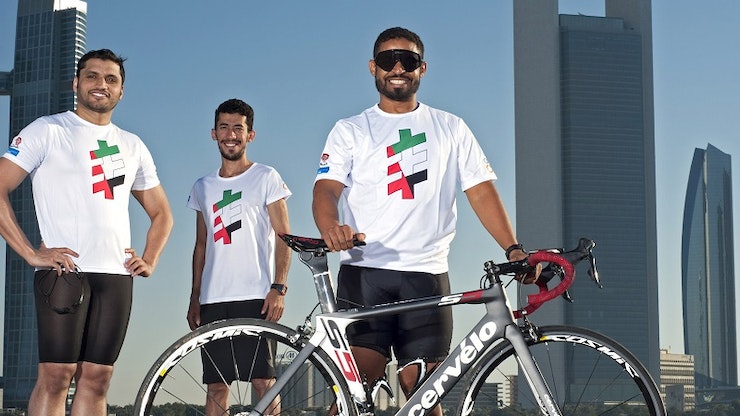 Abu Dhabi, UAE. Tuesday, 23 February 2016: Under the guidance and support of Abu Dhabi Sports Council, the first all-Emirati competitive team is set to compete in the ITU World Triathlon Abu Dhabi when the second edition of the season-opening World Series event gets underway on Abu Dhabi’s glittering Corniche on Saturday 5th March.

The three man team, comprising of swimmer Obeid Al Jasmi from Abu Dhabi, cyclist Badr Ali Thani from Dubai and Fujairah-born runner Khalifa al Nuaimi, will fly the flag for UAE in the Age Group category on the challenging Olympic Distance course alongside participants from 44 countries, including some of the world’s leading elite triathletes.

The season-opening event of the ITU World Triathlon Series features one of the most picturesque and spectator-friendly courses on the circuit. Over 2,000 athletes will swim, bike and run on courses laid-out entirely around Abu Dhabi’s Corniche, starting from the Abu Dhabi Sailing and Yacht Club next to the iconic United Arab Emirates flag. Participants will have the unique opportunity to race along the Abu Dhabi Corniche Road during the bike section before entering the transition zone to start the final running leg of the race.

Starting at the age of just five, 34-year-old Emirati Obeid Al Jasmi has put his passion for swimming at the centre of his life for 29 years. After representing the UAE in the 2004 Athens Olympics, the 2008 Beijing games and breaking dozens of national, Asian and GCC records in the meantime, the young Emirati has his sights firmly set on the Rio 2016 Games as part of the UAE Swimming National Team, and participating in the Olympic Distance at the ITU World Triathlon Series Abu Dhabi is a key component of his Olympic preparations.

Al Jasmi’s path to Olympic swimming greatness began in earnest at 13. He set a slew of national records that younger swimmers are, as yet, unable to break. As an adult, his 100-metre freestyle national best at the 2008 Beijing games of 53.29 seconds bettered his record of 53.7. His national record of 4 minutes12 seconds in the 400 metre freestyle at the President’s Swimming Championship in 2010 still stands.

“I am honoured to be selected by the Abu Dhabi Sports Council to pull together the first home grown Emirati team to compete at the ITU World Triathlon Abu Dhabi”, said Al Jasmi. “I am driven by challenging myself every day, I believe in training hard, knowing my competitor and continuously working on my weaknesses. Participating in an Olympic Distance event in my home country as part of an all-Emirati team, ahead of the preparations for my biggest dream, the Olympics, is an incredible opportunity to test my abilities alongside two great friends!”

Powering over the 40km cycle leg when Al Jasmi emerges from the 1500m swim leg will be cyclist, 35 year-old Badr Ali Thani. Following in the footsteps of his father who was a cyclist for Al Ahli Club, Ali Thani has been a keen cyclist for over two decades, competing in regional and international competitions such as the Asian Games, Sharjah Tour and Arabian Sprint Championship where he reigned champion.

The baton will then be handed over for the final 10km leg of the race to runner Khalifa Al Nuaimi, who, inspired by his brother and motivated by his inner passion for the sport, is set to run to the ITU World Triathlon Abu Dhabi finish line at the Abu Dhabi Sailing and Yacht Club. Al Nuaimi took up running since his teenage years participating in major tournaments and competitions such as the Gulf Championship. The 26 year-old from Fujairah will be joined by his team mates on the final straight so the three man team will cross the line together, flying the UAE flag in front of the race village and thousands of spectators.

“One of our core beliefs at Abu Dhabi Sports Council is to find ways to support UAE based athletes and enable them to participate in world class events at the pinnacle of their chosen sport, such as the ITU World Triathlon Abu Dhabi,” said Ahmed Abdullah Al Qubaisi, Director Of Marketing And Communications at Abu Dhabi Sports Council. “We’re constantly looking to further develop the role of sports and healthy lifestyles in the Emirate and UAE through continuously nurturing sporting talent across many different disciplines.”

Online registrations for the 2016 ITU World Triathlon Abu Dhabi are open to the public via the race website, AbuDhabi.Triathlon.org.