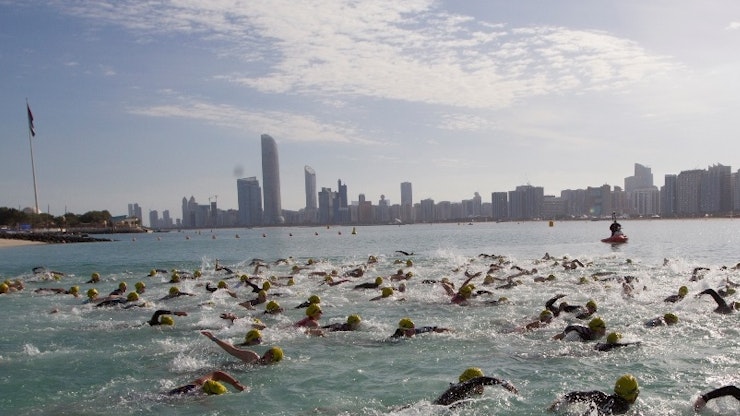 More than 60% of field already filled for ITU World

Abu Dhabi, UAE. Wednesday, 10 February 2016: Organisers of next month’s ITU World Triathlon Abu Dhabi are forecasting a sold-out event with over 1,200 athletes already signed up for the iconic challenge which returns to the shores and roads of the UAE capital on 4th and 5th  March.

“Nearly half the committed entrants - representing some 65 different nationalities - have chosen to test themselves against the same distance as the World Triathlon Series elite stars,” explained Ahmed Abdullah Al Qubaisi, Director of Marketing and Communications, ADSC.  “Add to that the phenomenal interest shown in our other Sprint and Maxi categories and we are left with only 600 places across all three distances, so interested athletes need to sign up fast”.

This year’s ITU World Triathlon Abu Dhabi will feature the best amateurs from across the region and the toughest world triathlon professionals who will battle for opening round points in the prestigious ITU World Triathlon Series to kick start their Olympic preparation season.

“This year’s event is particularly important for the world’s top triathletes as it marks the start of an Olympic season and is one of only three WTS events where Olympic qualifying points are on offer.  Consequently, we could see a number of elites make their national qualifying mark for Rio here in Abu Dhabi,” explained Race Director Gary Marescia. “This will be a once-in-a lifetime experience for Age Group athletes who will compete on the same course as our stellar line-up of World Champions and Olympic medallists, many of whom will be heading to Rio this August”.

Part of the top-tier ITU World Triathlon Series, Abu Dhabi has become a ‘must-race’ event for amateurs and professionals alike from all corners of the world with entrants flying into the UAE capital from 44 countries including Argentina, Australia, Japan, Korea, Brazil, USA and Mexico.

The event features one of the most picturesque and spectator-friendly courses on the ITU World Triathlon Series circuit. On March 5, over 2,000 athletes will swim, bike and run on courses laid-out entirely around Abu Dhabi’s glittering Corniche, starting from the Abu Dhabi Sailing and Yacht Club next to the iconic United Arab Emirates flag. Participants will have the unique opportunity to race along the Abu Dhabi Corniche Road during the bike section before entering the transition zone to start the final running leg of the race.

This year also sees the return of the World Triathlon Abu Dhabi Junior Triathlon and Aquathlon a fun event aimed at encouraging youngsters to get active. There are three entry categories: ‘Tiny Triathlete’ - a 50m swim and a 100m run (5 – 8 years), ‘Junior Aquathlon’ distance featuring a 200m swim and 1.5km run (9  – 15 years) , and ‘Junior Triathlon Super Sprint’ which consists of a 375m swim, 10km cycle and a 2.5km run (11 – 17 years).

Online registrations for the 2016 ITU World Triathlon Abu Dhabi are open to the public via the race website, www.AbuDhabi.Triathlon.org.