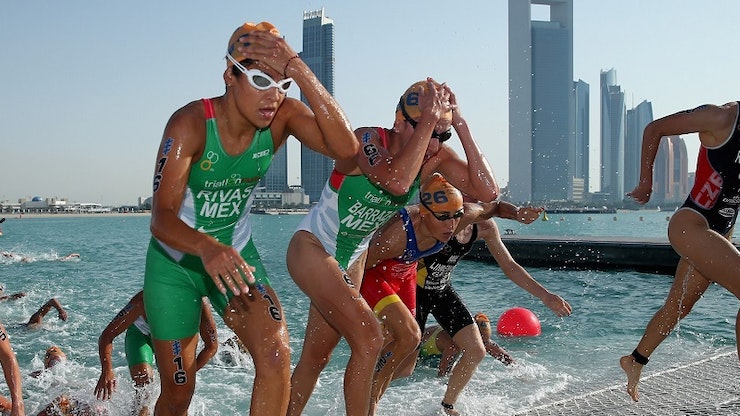 Abu Dhabi, UAE. Saturday, 5th March 2016: Claiming her first World Triathlon Series victory since 2014, Great Britain’s Jodie Stimpson finally earned her way back to the top of the podium by winning the first race of the season at the 2016 ITU World Triathlon Abu Dhabi.

After pushing through a long swim, a tough bike and an even tougher run, Stimpson broke away from a small four-man pack in the final lap of the race to reclaim her rights to a WTS gold medal. Showcasing an amazing come-from-behind performance, Australia’s Ashleigh Gentle earned the silver medal, while Stimpson’s British compatriot Helen Jenkins took the bronze.

“This winter I could not say that it could have gone any better. My training group has been highly motivated because none of us have made our Olympic spots yet. Me and Helen Jenkins, we are great rivals, she is just a fantastic athlete and I have so much respect for her. As soon as I crossed the line I went to her and thought we could not make it any harder for them really, but we are both in the same boat and it will be whoever has the best race in Gold Coast. It will be the best woman who wins and if Helen beats me in Gold Coast, she deserves to go,” said Stimpson on her win and her road to still qualify for the Rio Olympic Games this summer.

Gentle said of her amazing second-place finish, “I am so thrilled. I guess that goes to show that it is not over until it is over. Apart from not swimming so well, I actually felt pretty good about how I raced today because it was just Nicola and I pulling the turns together (in the chase group), so I was very thankful for her there because that was a really hard bike. It felt really good to catch up. I knew the run was going to be so tough.”

A perfect setting found the women with warm temperatures and no-wetsuit needed water conditions. With a long 1000-metre first lap, of the two lap swim, the field saw the women spread out into three different groups with Carolina Routier (ESP) and Pamella Oliveria (BRA) leading in its entirety.

As they made their way out of the Abu Dhabi Sailing and Yacht Club and into the first WTS transition zone of the season, Sarah True (USA) was third out of the water and helped assemble an 11-strong pack to begin the first few kilometres on the first bike lap that would last for 13-kilometres total and then shorten to six laps of 4.5 kilometres. The leaders quickly amassed to 25 as Stimpson pushed her pack to merge with the front runners, which consisted of Flora Duffy (BER), Alice Betto (ITA), Lisa Norden (SWE), Sarah Anne Brault (CAN) and Jenkins.

The chase bunch remained a steady 38 seconds behind for the first half of the bike leg with London Olympic gold medallist Nicola Spirig (SUI) and Gentle working solidly together to push the group forward. Holding steady as the front two and not letting the pace slow, they were able to close the gap between them and the principal cyclists down to just 15 seconds with three laps to go.

But the power of Spirig and Gentle was immensely felt just before the last lap of the cycle as they accelerated to merge into the front pack and force the peloton to tally 40. Unfortunately, mere metres before the transition zone, a crash caused a pile up and forced some athletes to lose their medal contention, including Spirig who was unable to recover and left the race after a gusty effort to continue on.

Heading out onto the run, Duffy, Jenkins, Stimpson and Emmie Charayron (FRA) broke away to create some initial space after a tough bike leg. But halfway through the 10-kilometre run, Charayron lost some distance and was replaced by Gentle, while USA’s Renee Tomlin showcased incredible strides that put her within the top five on the day.

As the last lap approached, Duffy pulled back into fourth and the podium was left to Stimpson, Jenkins and Gentle. It wasn’t until the last kilometre that Stimpson gunned ahead of the other two to secure her place at the top of the podium. Gentle surpassed Jenkins and come in just eight seconds behind Stimpson for the silver, while the final podium spot was left for Jenkins.

While only one spot remains for the women’s Great Britain Olympic team, the decision will come down to the race in the Gold Coast. Jenkins said of her race today, “It is really good to get on the podium after a tough year last year, so it shows I am moving in the right direction for our selection race in the Gold Coast.”