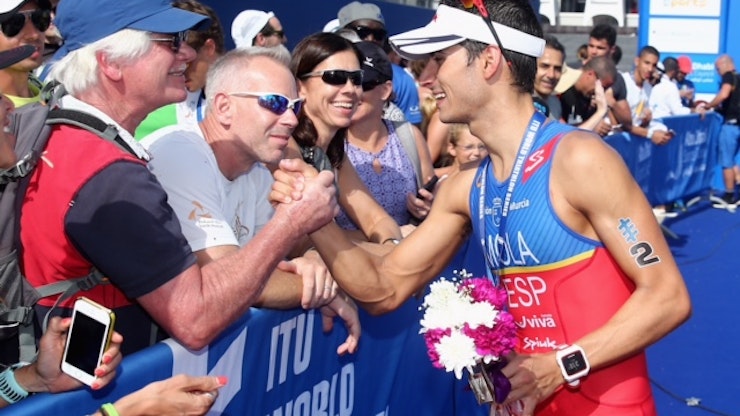 Abu Dhabi, UAE. Saturday, 5th March 2016: Spain’s Mario Mola started off the new World Triathlon Series season exactly where he finished, on top of the podium, as he shook off a slow swim and a penalty to win the ITU World Triathlon Abu Dhabi for the second consecutive year, in front of thousands of spectators.

Reigning Champion Mola exited the swim field near the end and then gained a penalty in transition one for an equipment infringement. But after a technical 40km bike brought the field together, he blasted out of transition two and had already hit the front in the first lap.

After extending a 10-second lead over a chase group that included Richard Murray, Joao Silva and Fernando Alarza, Mola made a tactical decision to take his penalty at the halfway mark of the run. That set him back on course a few metres behind that trio, but he quickly caught their heels. It then took him less than a kilometre to find his way to the front, and that’s where he stayed for the rest of the race.

While at stages it looked like Murray was in catching distance, Mola simply surged away to collect his second WTS win in Abu Dhabi, and his second win in a row after taking out the 2015 Grand Final in Chicago. Mola’s winning time was 1hour 46minutes and 39seconds, finishing ahead of training partner Murray and Portugal’s Joao Silva.

“Things couldn’t have got much harder today, it’s very hot outside, of course it’s hot for everyone, but it’s makes it very tough,” Mola said. “I didn’t swim great, but I was able to get to the front on the bike and then when they called me for the penalty, I imagined it was going to be a bad day…but when I had those 10, 15 seconds, I thought, that is the time to stop and get back into the pack again. Richard was amazing today, as was Joao and Fernando, but I felt great, and I’m happy to get the win here.”

Despite an emotional start to the day after laying flowers in tribute of their beloved passed teammate Laurent Vidal, the French team let it known they showed up to perform today early in the race.

Raphael Aurelien blew through the 1500m swim, setting the pace on the first long 1k swim loop. Henri Schoeman (RSA), known for his skill in the water, took over Aurelien around the second, shorter 500m lap to lead Ryan Fisher (AUS), Alesandro Fabian (ITA) and a group of eight more men out of the water and into T1.

That powerful dozen pushed out a tough pace on the first of seven bike laps, which included one long lap around the Cornice, followed by six shorter circuits of 4.5km loops. France continued to display its fortitude with Dorian Coninx taking a turn up front on the second lap.

But it was also on that lap that Murray made his move to bridge up to the lead group, which led to the remainder of the field eventually pulling even to create one massive train of men. The field of more than 60 men charged through the streets of Abu Dhabi for the remainder of the two laps until Fabian broke away with two laps to go. His break stuck, and the Italian enjoyed a 13-lead into the second transition.

Fabian was the first athlete of out T2, but knowing he would have to serve a 15-second penalty for failing to get his equipment into the box in the first transition, Mola hammered away from the men straight off the front of the run.

Over the next three laps he would only continue to extend his lead, with training partner Murray heading up a pack of nearly 10 men that included Alarza and Vicente Hernandez. The pair of Spaniards are battling for critical Olympic qualifying points, making their position in Abu Dhabi doubly important.

After Mola took his turn in the penalty box, Murray, Silva, and Alarza blew past him, but their lead was short lived. The reining Abu Dhabi champ quickly chased down to make it a four-man race onto the bell lap. However, he quickly made it clear he was the man to beat, striding to the front, and dropping Alarza first and Silva second. While Murray held on until the end, he couldn’t challenge his training partner for the top spot and had to settle for silver. For Silva, it marked his first time on a WTS podium since Yokohama in 2013.