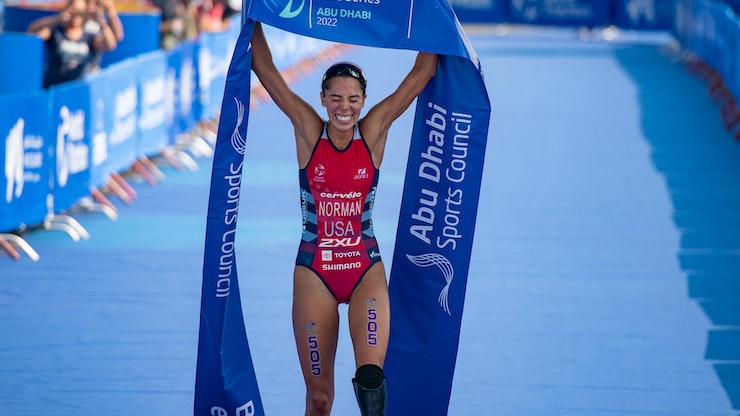 The World Triathlon Para Championships got the 2022 Championship Finals Abu Dhabi underway on Thursday morning in Yas Bay waterfront, with twelve titles awarded across the six men’s and women’s categories.

With the water and air temperature in the high 20s and a new course to tackle, race management was always going to be crucial, and there were familiar faces using all their experience to scoop the golds.

It was Susana Rodriguez B1 with yet another untouchable showing in the opening PTVI race, albeit with a far smaller margin of victory than 12 months ago as newcomer Francesco Tarantello B3 put together the fastest run split of the day to pile on some late pressure. The Italian ran out of course but was delighted with a debut World Championships silver, with Great Britain’s Alison Peasgood B2, claiming third place.

Commenting on her victory Rodriguez said: “I’m very happy with our race, especially considering how the last months have been for me. We also had a little crash yesterday at the familiarisation and I was a bit scared today as I was not super confident, but I am extremely happy. I really enjoyed the race. It was very technical and fast, and with the heat I struggled at some points, but thanks to my guide Sara, she was pushing me all the way through. She is not only my guide but also my mental coach.”

The men’s race saw Dave Ellis B3 run his way to the gold, successfully defending his world title alongside guide Luke Ellis. Thibaut Rigaudeau B2 was clearly enjoying his first world championships as he set the early pace, but once Ellis found his groove there was no stopping him defending the title, he won last year. Antoine Perel B1 crossed the line behind Rigaudeau for third, setting up a strong day for the French.

“It was a real quick bike for everyone,” said a smiling Ellis. “Thankfully we came off near the front and were able to put a good run together. The heat was manageable, and we just had to pace it, but we’ve got some good medal chances out here today and we’re looking to come away with some.”

Lauren Parker was once more the star of the women’s wheelchair race, overcoming technical issues on the bike that cost her almost a minute over the field but thankfully not her title chances. Paralympic Champion Kendall Gretsch was again lightning fast in transition and chasing hard through the final segment but couldn’t reel in the Australian, as she did in Tokyo. Parker won by 25 seconds from the American and last year’s runner up, Jessica Ferreira H1 of Brazil, took home third place.

The men’s race was another masterclass from Netherlands’ Jetze Plat H2 as he added yet another season to his remarkable winning streak. The Dutchman pulled clear of the field over the

750m swim, Florian Brungraber H2 (AUT) trying not to lose too much ground and quickly out onto the 20km hand bike but Plat wouldn’t be caught. It was to be an excellent silver for the Austrian as he was able to keep Geert Schipper (NED) at bay and reverse their positions from 2021.

Plat said: ‘‘It was a good swim. A little slower than normal, but I’ve done a lot of work in the wheelchair the last couple of months, so I knew that was going to be the good part. It was a technical course with small corners and bumps, so you must focus on every second of it. I’ve completed three major marathons in the past months so I have improved in the wheelchair and I am definitely happy with that performance.”