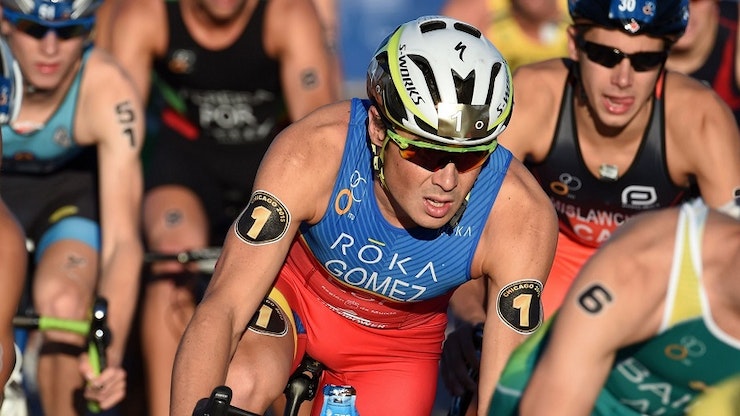 Spaniards Gomez and Mola, who have both qualified for Rio 2016, have confirmed they’ll be on the spectacular start line in the UAE capital for the March 5th season-opening ITU World Triathlon Abu Dhabi, hosted by Abu Dhabi Sports Council (ADSC) on the city’s stunning Corniche - one of only four World Triathlon Series (WTS) events where Olympic qualification points are on offer.

With a record-breaking five ITU World Championships to his name, 32-year-old Gomez is a front runner for ‘The Pinnacle of Triathlon’ title in the UAE’s capital, but will face fierce competition from 25-year-old Mola who is intent on retaining his 2015 Abu Dhabi title.

Mola will undoubtedly enjoy huge support from his strong local fan base who will recall his thrilling 2015 finish stretch battle against Frenchman Vincent Luis and South Africa’s Richard Murray, the latter of whom has also confirmed for next month’s event.

“I’m really looking forward to returning to Abu Dhabi. I had a great start here last year, which set me up for one of my best seasons,” Mola commented.  “The course is surprisingly challenging, the crowds are great and Abu Dhabi is a beautiful location for an ITU World Triathlon Series race. It will be an ideal location to the get the 2016 season started.”

The 2016 Abu Dhabi field is already a triathlon triumph with eight out of the world’s top 10 male triathletes confirmed for the second annual ITU World Triathlon Abu Dhabi.

Following last year’s highly successful inaugural staging in the UAE capital, the ITU has elevated the Abu Dhabi leg from a Sprint distance to an Olympic distance course, ensuring the world’s elite use the opener to test themselves in racing conditions similar to those of Rio.

The elite field of 65 men and 65 women is already fully subscribed with 120 men and 80 women still remaining on the waiting list to compete in the race, which will be contested with a 1500m swim, 40km bike and a 10km run routes.

ITU President Marisol Casado stressed the importance of this year’s season opener, “Abu Dhabi staged an outstanding event last year, and the elevation of the Sprint distance to an Olympic distance course for the 2016 edition is testament to the quality of the course, the level of organisation and the fact the athletes love to compete here. ITU World Triathlon Abu Dhabi will be a thrilling event as the world’s best athletes strive to achieve their dreams and qualify for Rio.”

The second ITU World Triathlon Abu Dhabi is set to be spectacular, as the world’s top triathletes begin their Olympic preparation campaigns alongside over 2,000 amateur triathletes on one of the sport’s most picturesque course layouts.

“Places are still available for age group entrants to experience the very same course as the world’s best on their journey to Rio,” said Ahmed Abdullah Al Qubaisi, ADSC’s Director of Marketing and Communications.

Proving that triathlon is for everyone, the World Triathlon Abu Dhabi Age Group races cater for all fitness levels by offering a number of course options: Sprint (500m swim, 20km cycle, 5km run), Olympic (1500m swim, 40km cycle, 10km run) and Maxi (1500m swim, 80km cycle, 20km run). Participants can enter any of these distances as an individual or as a team of friends, families or corporate colleagues.

This year also sees the return of the World Triathlon Abu Dhabi Junior Triathlon and Aquathlon; a fun event aimed at encouraging youngsters to get active. There are three entry categories: ‘Tiny Triathlete’ - a 50m swim and a 100m run (5 – 8 years), ‘Junior Aquathlon’ distance featuring a 200m swim and 1.5km run (9  – 15 years), and ‘Junior Triathlon Super Sprint’ which consists of a 375m swim, 10km cycle and a 2.5km run (11 – 17 years).

Limited entry places are still available at http://abudhabi.triathlon.org/enter for both the Aquathlon and the ITU World Triathlon Abu Dhabi.