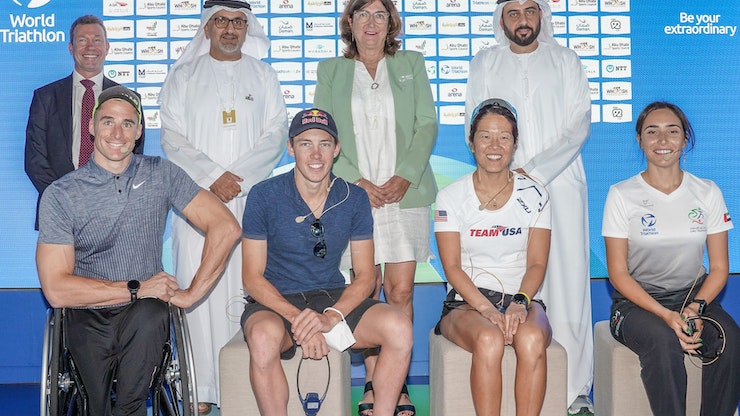 The World Triathlon Championship Finals have arrived in Abu Dhabi ahead of three incredible days of elite, age group, para, and community competition.

A press conference was held today to officially launch the event, and featured dignitaries from Abu Dhabi Sports Council, World Triathlon, UAE Triathlon, and presenting partner Daman – along with some of the athletes from across the Elite, Para and Age Group World Championship categories.

The event is the climax of World’s Triathlon’s annual calendar with astonishing fields assembled in both the men’s and women’s elite races. The world’s top ten athletes in both categories will be on display along with a host of Olympic, World, Commonwealth and European champions, in what is an almost unprecedented quality of field.

Along with the top ten athletes, the whole men’s podium from the Tokyo Olympics will be present including Norway's Kristian Blummenfelt who won gold, silver medalist Alex Lee from Great Britain, and New Zealand’s Hayden Wilde who won the bronze. Wilde and Lee are now number one and two in the world respectively and are expected to feature heavily in the final Championship reckoning.

On the women’s side, Bermuda’s Flora Duffy took gold in Tokyo, with Britain’s Georgia Taylor-Brown the silver. Their roles have now been reversed and Taylor-Brown arrives in Abu Dhabi with the number one ranking, and Duffy close behind in the race for the title.

Over 80 international federations will take part in the World Triathlon Championships Finals events, – showing the incredible strength and reach of the sport, as the Finals take place in Abu Dhabi for the very first time.

Taking place on Yas Island, the women’s elite race will start at 1pm on Friday, with the men getting underway at 3pm on Saturday.

Hundreds of community triathletes are also expected to take part this week, with a kids and junior event from 4pm on Friday, and age-group community races taking place from 10am on Saturday.

Speaking at the press conference, His Excellency Aref Al Awani, General Secretary of Abu Dhabi Sports Council said: “Abu Dhabi extends its very warmest welcome to all athletes, officials, and support staff who will be taking part in the World Triathlon Championship Finals this week. We are honoured to host this prestigious event, and we thank World Triathlon for giving us their trust to host a truly memorable championship.

“This further endorses Abu Dhabi as a growing epicentre for world sport having already hosted the NBA, UFC, F1 and world championship boxing in recent weeks. We wish all athletes competing the absolute best of luck and look forward to some incredible competition.”

Marisol Casado, President of World Triathlon, and IOC board member said: “The excitement around this event is incredible and reflects the quality of the fields in places across elite, age group, and para categories. The world’s best will be on this magnificent stage in Abu Dhabi, which is befitting of the season finale. We cannot wait to crown multiple champions here on Yas Island, and we thank Abu Dhabi Sports Council, UAE Triathlon, and Daman for helping us deliver an event of this magnitude.”

Khaled Al Fahim, President of UAE Triathlon said: “To hold the World Triathlon Championship Finals here is not only wonderful for Abu Dhabi, but the UAE. Our Team UAE triathletes will get the opportunity to compete against the world’s best, on home soil, which is an incredible experience. We will also have hundreds of community athletes taking part on the same stage as the biggest names in the world which is a huge thrill. The hosting of events such as this can only build the profile of triathlon in the UAE and help build participation levels to further strengthen the sport in our country.”

Stuart Leatherby, Chief Commercial Business Officer of Daman said: “Daman is delighted to be sponsoring the World Triathlon Championship Finals in Abu Dhabi. We are invested in the long-term health and well-being of all the people of the UAE, and triathlon is a great route to living a healthier lifestyle.”

Among the athletes attending the media conference was current men’s world number one Hayden Wilde of New Zealand. Technically one of nine men could claim the title on Saturday, but realistically it is likely to be Wilde or Yee who take the crown. Wilde said: “I’ve been in Abu

Dhabi for three and a half weeks now, and I’ve been enjoying my time. I’ve been doing a lot of training sessions at the New York University here - the facilities really are superb. The community and the Abu Dhabi Sports Council have been so welcoming and have been so supportive as I prepare for this weekend’s race. It’s going to be an exciting competition between myself and Alex Yee. Whoever crosses the finish line first will take the championship world title.’’

Hana Alnabulsi will be representing Team UAE this week. She is the youngest Emirati female to complete the famous Ironman 70.3 and is looking forward to competing in her home country. She said: “It’s honestly a blessing for me to be part of Team UAE and I am honored to be racing on my homeland. I am racing for my people and with my people.

‘‘Since I was young it has been a dream of mine to represent the UAE and I am so grateful that the UAE believes in me. Now my country will be able to see me compete in what I love to do. I can’t wait for Saturday’s race and show my family and friends what I have trained so hard for.’’

From the Paralympic podium, Netherlands’ Jetze Plan said: ‘‘Winning will always motivate me, and tomorrow I’ll be going for my sixth world title in triathlon. Last year I competed on the circuit and this year I will be competing on a different course, so it will be a new challenge, but I am ready for it.

‘‘To prepare for this weekend’s race I did some crazy things. This year I competed in three marathons in the racing chair - Berlin, London, and New York, so there was a little bit of focus on the running part in the racing chair, and now I am back focused on triathlon.’’