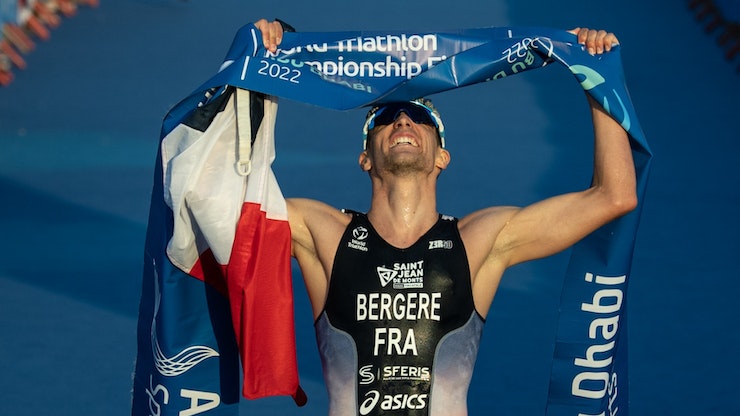 The World Triathlon Championship Finals 2022 presented by Daman have come to a close in Abu Dhabi after four days of scintillating competition and activities, further enhancing the UAE capital’s place as a global sporting event leader.

More than 80 international federations were represented at the Finals, hosted in Abu Dhabi for the first time, with the stunning backdrop of Yas Waterfront on Yas Island – a global hub for major sporting competition.

This was the culmination of the 2022 World Triathlon Series season, as world champions were crowned across elite, elite U23, para, and age group categories – with jubilant crowds on hand to cheer them home in a festival-like atmosphere. In addition, community and junior races hosted athletes of all ages and abilities giving athletes the chance to race on the same course and the same weekend as the world’s best.

His Excellency Aref Al Awani, General Secretary of Abu Dhabi Sports Council said: “Abu Dhabi has a long history with the sport of triathlon, but to host the World Triathlon Championship Finals for the first time has been an incredible honour. We thank everyone who has made this possible including event organisers, athletes, fans, sponsors, World Triathlon for putting their trust in Abu Dhabi to host this end-of-season showpiece, and Yas Island which has once again shown what a world-class sporting venue this is.

“The level of competition across all categories has been incredible. We have been inspired by all the athletes who took part and provided an excellent spectacle, but we must offer a special congratulations to the winners.’’

Marisol Casado, President of World Triathlon, and IOC board member said: “This has been the perfect end to a wonderful World Triathlon Series season. The competition was fiercely contested, and all the athletes showed us what triathlon is all about – amazing levels of fitness, determination, and heart – but also a wonderful sense of community and inclusion. To see so many taking part in community, age group, para, and elite competition shows the inclusivity of this sport, and we take huge pride in seeing participation growing year after year.

“An event of this size and importance is a huge undertaking to host and we offer our thanks to Abu Dhabi Sports Council for once again showcasing why Abu Dhabi is one of the world’s most iconic sporting venues. We are also grateful to UAE Triathlon for their phenomenal support in making this a week to remember.”

Stuart Leatherby, Chief Commercial Business Officer, Daman said: ‘‘Once again we are delighted for Daman to be a sponsor for the World Triathlon Championship Finals. This has been a very special event as it has brough both elite and community athletes together in a huge celebration of sport and wellbeing

"Triathlon is a very accessible sport, whether swimming, cycling, or running and it was particularly inspiring to see all the community athletes taking part this week. We can't all be elite competitors but through sports, like triathlon, we can all get a little more active, improve our health, happiness and overall wellbeing - and that's a message we have seen loud and clear during this fantastic week.’’

In the elite races, an almost unparalleled field has been assembled featuring the world’s top ten athletes in both men’s and women’s categories along with a host of Olympic, World, Commonwealth and European champions.

After three-days of sporting excellence, Saturday afternoon concluded with the world’s best triathletes battling it out in an exhilarating showdown, which saw French Olympic athlete, Léo Bergere take home gold in the men’s elite race. Swiftly behind Bergere was USA’s Morgan Pearson, and Jelle Greens from Belgium proudly claimed bronze.

In the women’s elite event on Friday Flora Duffy won an action-packed race to become the woman to win four World Triathlon titles, while her biggest rival for this year’s crown Georgia Taylor-Brown had to settle for silver in Abu Dhabi and second in the overall season standings.

Triathlon is one of the most inclusive sports on the planet and that has been showcased over the last three days with age group, para, and community events running alongside the elite competition.

History was made on Saturday morning with the first-ever Para Triathlon Mixed Relay – with Team Australia II taking the honour of becoming the first to cross the finish line.

On Thursday twelve titles were awarded across the World Triathlon Para Championships with some awe-inspiring displays in the wheelchair and visually impaired classes. Cheered on by vociferous support the athletes put on an incredible display under the warmth of the Abu Dhabi sun.

In the PTWC category Lauren Parker was once more the star of the women’s wheelchair race and the men’s race witnessed another masterclass from Netherlands’ Jetze Plat, as he added yet another season to his remarkable winning streak. It was Spain’s Susana Rodriguez who delivered yet another untouchable winning performance in the PTVI race category, and the men’s race saw Great Britain’s Dave Ellis run his away to the gold, successful defending his world title.

Jules Ribstein of France and the USA’s Hailey Danz shone in the PTS2 category, while in the PTS3, it was Spain’s Daniel Molina and Elise Marc of France who took the honours.

Andrea Miguelez Ranz moved up from PTS3 to PTS4 to claim another world title, while Alexis Hanquinquant of France earned a fifth world title in the Abu Dhabi. In the PTS5 category, there were wins for Canadian Stefan Daniel and America’s Grace Norman who shrugged off illness to take gold.

In the under-23 categories, it was double delight for Great Britain as Conor Bentley and Kate Waugh won the men’s and women’s races respectively to take not only gold in Abu Dhabi but the overall world titles.

It was not only world titles on the line this week, however. Hundreds of local athletes took part in community and kid’s races – showing not only the inclusivity of the event but the growing strength of triathlon participation levels in the UAE.

“We would also like to extend our thanks to the Sports Authority in the State of Kuwait for its unlimited support and of course to the United Arab Emirates and the Abu Dhabi Sports Council. The tournament was organised superbly, and the atmosphere on-ground was the perfect support and motivation for all athletes.

Ali Maqbool, President of the KSA Triathlon Federation, said: “This was our first participation in a world triathlon championship, and we participated in the U23 Super Sprint races.  This was no doubt a strong and important start for us, and we hope that this experience will enable us to gain the necessary experience to compete again and hopefully take first positions in future editions of the championships.

Abu Dhabi has proven itself to be a distinguished and world-class organization to host global sporting events and what makes this edition so special is the choice of Yas Bay as the competition track. The location gave a boost of enthusiasm to all participating athletes.’

Cooperation Council plays in organising such important, global sporting events. This year marked our third participation in a world triathlon championship final, which is a great achievement for the Kingdom of Bahrain. We are making every effort to participate in all categories within the championships.’’